Wont Get Fooled Again: The Who From Lifehouse To Quadrophenia


Won't Get Fooled Again: The Who from Lifehouse to Quadrophenia

Won't Get Fooled Again: The Who from Lifehouse to Quadrophenia

He was literally a one man band while part of a super rock group. But it never struck me until reading the book that Townshend's isolation in the studio -- and his ability to get a song nearly, but not quite all there by himself -- may have hurt him. Do you think his isolation, literally shutting himself inside a studio to work out "Lifehouse" may have added to the reasons why he could never fully realize the concept?

I've got more questions, a few along the lines of Townshend's relationship to the group at this time as well as the use of cutting edge technology by the band -- technology that worked and a good deal that didn't. Any way, great book, great subject, and looking forward to the conversation. First just want to point out that I was born in '65 so all my impressions of some records Tommy and Who's Next are from someone for whom they have always existed. I was almost 7 when Quadrophenia came out and it seems, in retrospect, that it spoke to me instantly and then repeatedly as I grew up among the same sort of inter-tribal forces in a very different place Houston, TX:proto-punks and punks vs.

There was a cultural shift going on when Quadrophenia came out especially WRT American radio programming see Elvis Costello's 'Radio Radio', Joy Division's 'Transmission' and even my own 'Radio V8' which was codifying everything it decided it liked for the day and blocking out the rest. What are your thoughts on these changes in popular perception of music and their apparent effect on the popular and cultural appreciation for Quadrophenia?

I don't know many who have ever owned the album but many who have seen the film and perhaps even bought the record after seeing it. The only number from this record I can immediately recall hearing on the air is 'Love Reign O'er Me'. Was the rest of it just too far from the modern style? I mean, were the radio and the record buyers just not interested in that period of almost recent history? Were we too busy reaching for the future at that point now that we had made it through the 60s?

I recall Jethro Tull's 'Too old to Rock and Roll' being similarly dismissed by some I knew perhaps because it was a backward glance. Looking forward to getting more reading done. I'm going to first answer John's questions one by one. I focused on this particular part of the Who's output because the book's publisher was looking for books about a particularly interesting, specific period of a major artist's career. One attempt, "Lifehouse," failed to reach completion, although it supplied the bulk of their album "Who's Next" and various other tracks that have surfaced on other collections.

The later attempt, "Quadrophenia," was completed and both commercially and artistically successful, though not without its problems both in getting made and working as a concept album. The "Lifehouse" project was especially interesting to me because it's possibly both the most ambitious rock concept album ever attempted, and with the possible exception of the Beach Boys' "Smile" the most interesting classic rock album that was never finished.

Although the story of how "Lifehouse" was launched and why it failed to be completed is discussed in several books about the Who's entire career, my book allowed me to go into greater depth on Lifehouse and this period of the Who's career than had been possible before.


Pete Townshend intended it to also be the basis of a film, and for that film to probably include scenes of the Who, in concert and otherwise. He also hoped for some of the songs and story to develop out of their interaction with audiences during concerts over a several-month period. It was a multimedia project that was ahead of its time, and for that reason and many others, proved impossible to do with the technology that was available in and The conflicts between his idealistic visions and practical realities that got in their way makes for a very complex and dramatic story.

One key reason I think it was artistically successful, and able to be more easily completed than Lifehouse, is that Townshend and the Who were writing, singing, and performing personal material that was very much about themselves, even if was sometimes acted out by invented characters and personas.

It's not quite autobiographical in a literal sense, but it's very much about their fans, people they knew, and in some senses their own lives. In part that's because he was a very interesting and mostly articulate interviewee. In part it's also because many of the interviews have not been republished and have been difficult to access especially the ones that appeared in the British press.

It is amazing how many interviews Townshend gave in the early part of his career, especially the early s, and especially and , when he was formulating and trying to explain "Lifehouse. It's unbelievable from today's perspective, for instance, that he wrote a monthly column for the British weekly Melody Maker for almost a year, and would actually invite the staff member who picked it up from his house in for tea. It's also unbelievable that he'd make himself available for a huge three-part interview in an underground paper The Los Angeles Free Press with limited circulation compared to the general newspapers and popular rock press, and personally congratulate the writer of the story soon after the first installment appeared.

John, as to your particular question about how Townshend would sometimes contradict himself or at least often state what he had in mind with his projects in different ways as it changed shape in his mind, it was very interesting if complicated to trace how his ideas evolved.

When he's discussed his work including "Lifehouse" and "Quadrophenia" in decades subsequent to the s, his opinion has often flip-flopped as to those works' strengths and weaknesses. Because he gave so many interviews, however, I think these provide a more reliable record of how he actually felt about what he was doing at the time and the ideas that were coming and going, rather than the fuzzier accounts from both factual and opinionated perspectives he gave in later years. Because he never really succeeded in explaining "Lifehouse" too coherently in his interviews, you do get a sense of how much more frustrating it must have been for people in the Who and their inner circle to follow it than it was for even hardcore fans.

The Who, their managers, and their associates like producer Glyn Johns had to both worry about how to translate this into something popular and comprehensible, and to confront Pete as both Roger Daltrey and Glyn Johns sometimes did with the cold reality of how it might not or ultimately couldn't work in the way Townshend envisioned.

The people who understood Lifehouse included one, Pete Townshend. These were more elaborate one-man-band-type productions by the time of "Lifehouse," of course. The Who were used to working with Townshend's demos as templates, and I think both Pete and the rest of the band realized the advantages of working this way. Townshend could work out the arrangements in fine detail, yet Daltrey's vocals, Entwistle's bass and sometimes horns , Moon's drums, and some harmonies and other ideas were necessary to get the most out of the material.


The difficulty, I think, was more that the songs didn't cohere into a story, or even tunes that fit together in mood and theme, nearly as well they did in "Tommy" and "Quadrophenia" though the plots and narratives of both of those were sometimes hard to follow. Combined with the pressure the band felt to get an album out and get on the road, the compromise, with which Townshend was never entirely happy, was to make a single non-concept LP, many though not all of whose songs could be played in concert to promote the album in the last half of Almost certainly they would have included eight of the nine songs on "Who's Next" every track except John Entwistle's "My Wife".

My educated guess is that "Pure and Easy" didn't make "Who's Next" because it was felt, by Glyn Johns and possibly others, that the use of some of its key lines in "The Song Is Over" might have made "Pure and Easy" seem repetitious and redundant. But Johns and others might have felt that if the decision had been made to make a non-concept album, there shouldn't be room for reprises, and that indeed they might have come off as rather confusing.

It's ironic that "Pure and Easy" didn't make the album, however, since it more than any other piece was the song from which the core theme of "Lifehouse" the discovery of a note that transforms the world evolved. Feel free to elaborate or correct me if that's not what you meant. I was 11 years old when "Quadrophenia" came out in late My recollection thus isn't as detailed as it might have been, but I really don't think it was overlooked or that limited in its airplay. 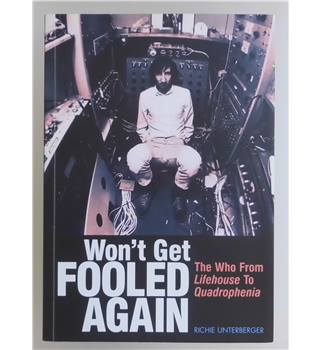 Those were back in the days when commercial radio stations would sometimes play major popular albums in their entirety, and I do think "Quadrophenia" was spun from beginning to end on some occasions. This has been reassessed over time, now that "Quadrophenia" has been reexamined and reappreciated over a period of decades, and often esteemed nowadays to be in the same league as "Tommy.

In part that's why the Who with the Keith Moon lineup only made "Quadrophenia" the core of their concerts for a few months in late and early , rather than for a year or two as they had with "Tommy. Certainly it introduced the material to many listeners too young to have heard or properly appreciated the album when it was first released in , and thus boosted sales retroactively. But I do think the bulk of the album's commercial and audience impact did take place upon and shortly after the original release, not in the wake of the film.

I would hate to think what kind of pigeon hole the band might have been shoved into. And if that concept hadn't worked we might never have gotten Quadrophenia. If the two dozen or so songs that have fairly reliably been reported to have been in the running for "Lifehouse" all been placed on the same album, the record would have been pretty uneven in my view. Even the "placeholder" songs on "Tommy" that were there mostly to move the plot along had their merits, as did the instrumental link tracks on "Quadrophenia," although these songs don't hold up too well outside of the concept album context.